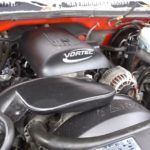 The 4.8 Vortec is a small-block V8 engine produced by General Motors from 1999-2013. The engines spanned from Gen III to Gen IV of the Vortec series before being phased out after 2013 in favor of the 5.3 Vortec with Active Fuel Management. The 4.8 Vortec had three different variations throughout its lifespan: LR4 (Gen III) 1999-2006 Silverado and Sierra 1500's (as … END_OF_DOCUMENT_TOKEN_TO_BE_REPLACED