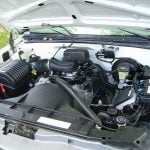 In 1996, Chevrolet released their 7.4 Vortec V8 engine, also known as the Vortec 7400. It was part of Chevy’s penultimate generation of their big block series, and it is sometimes called the 454 Vortec. It is distantly related to the 454 LS6 V8 that Chevy put in their famous 1970 Chevelle SS -- hence the 454 name. Though it had a relatively short production span of only five … END_OF_DOCUMENT_TOKEN_TO_BE_REPLACED