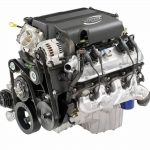 Released in 2001 the 8.1L Vortec was the biggest and last of the GM big-blocks to be produced. It replaced the 7.4 Vortec and was around until 2006 when it was phased out in favor of the smaller and more fuel efficient Vortec engines. The Vortec 8100 was built off of the GM 454 engine platform, also known as the 7.4 Vortec. It was produced as a gas alternative to the new … END_OF_DOCUMENT_TOKEN_TO_BE_REPLACED

At an impressive 8.1L engine size, the Chevy 8.1 Vortec is the largest engine to be featured in consumer-class Chevy vehicles. The Vortec 8.1L was introduced in 2001 as a replacement to the 7.4L Vortec which was in production from 1996-2001. The Vortec 8.1 and 7.4 were both only featured in the HD 2500/3500 series trucks and suburbans and other commercial class vehicles and … END_OF_DOCUMENT_TOKEN_TO_BE_REPLACED