The Detroit Diesel Series 53 engines have been in production for more than six decades. Detroit Diesel, a subsidiary of General Motors, introduced the Series 53 in 1957, and it is still being made today. GM put the engine in several medium duty trucks, commercial trucks, and boats. The Detroit Diesel 53 Series has even found its way into missile launchers and vehicles for some of the world’s biggest militaries. There are six versions of the Series 53, which range from 2-12 cylinders and are available in both inline and V configurations. 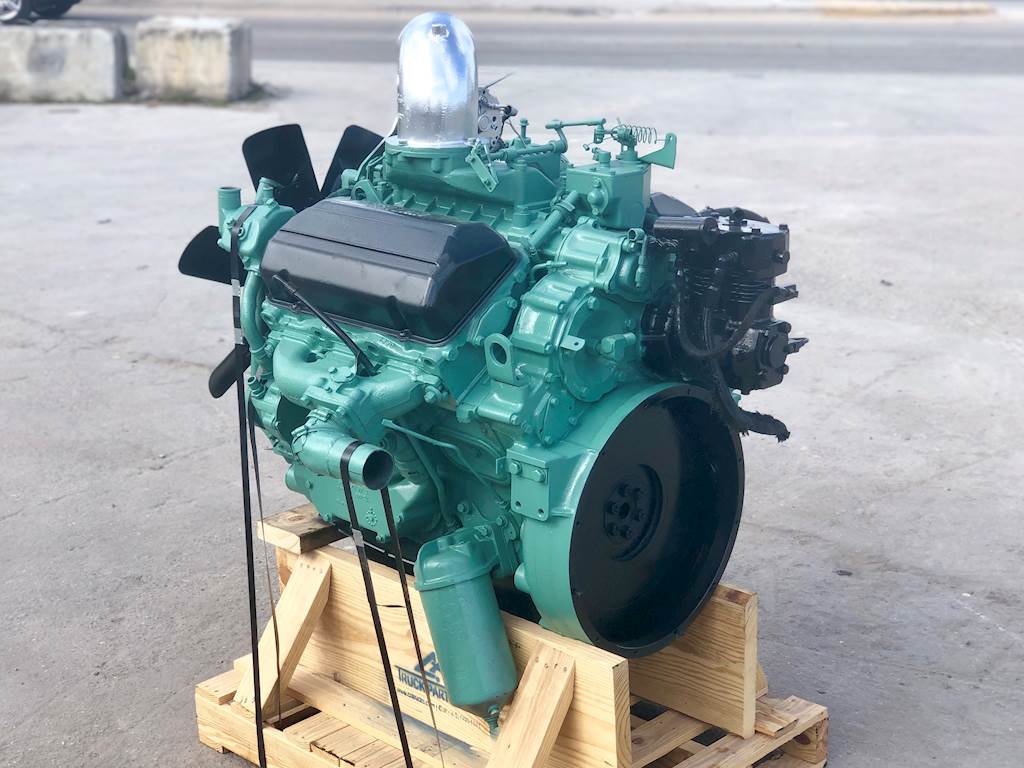 The Detroit Diesel Company (DDC) made engines for the General Motors company from 1934-2000, until Mercedes-Benz bought it out. Since 2006, the company MTU Friedrichshafen has largely handled American production of DDC engines.

DDC released the first Series 53 engine in 1957 as the successor to the Series 50 engine. It was DDC’s first engine designed for use with on-highway applications and was soon followed by the Series 71. GM immediately put the series 53 engines in medium duty trucks on the GMC/Chevy B/C series chassis, and there were also a few rare early-’60s Studebaker trucks with the 4V-53. GM also put them in lots of marine equipment, construction vehicles, peterbilt trucks, and countless other vehicles.

The Detroit Diesel Series 53 and the Military

There are also several of military applications for the DDC Series 53 engines. The Air Force used the 3-53 engine in aircraft spotting dollies, and they used the 4-53 engine in US Air Force MJ-1 aircraft hydraulic test stands and US Navy P-16 shipboards.

Several variants of the 6V-53 are in the M113A1/2/3 armored personnel carriers and M730 Chaparral surface-to-air missile systems. Turbocharged 6V-53s have found their way into many different vehicles. These include the MOWAG Piranha, M113,and AMX-13, and the engine is NATO certified up to 350 hp. After introducing the Detroit Diesel Electronic Control (DDEC) IV system with an intercooler, the engine gained another 50 hp. Vehicles in the French, Israeli, Canadian, Italian, Saudi Arabian, Lebanese, Venezuelan, and United States militaries have utilized Series 53 engines.

Today, many of these engines are still in service in these vehicles and see use in war zones daily. MTU Friedrichshafen still manufactures brand new 6V-53s for the U.S. Army’s use today. There are also still tons of Series 53 engines still working in boats, generators, and of course medium duty trucks.

As we mentioned, the Detroit Diesel Series 53 engines were available in a ton of different applications – both vehicle and non-vehicle. It powered countless construction vehicles, like dump trucks, P&H Omega 18 rough terrain cranes, Clarke forklifts, and generators. It has also been used extensively for marine applications, including sidewinder boom boats and tree skidders. John Deere also used the 2-53 in many tractors for the first few years of its production.

GMC/Chevy put the Series 53 in their B/C chassis trucks from the 1960s-1980s. There were also in the GMC 6000/6500/7000 series of commercial medium duty trucks. Several other commercial vehicles used various 53s, including some older Studebakers and Peterbilts.

One of the most extensive uses of the Series 53 has been in military vehicles from over 20 countries. Below is a partial list of the military applications for the Detroit Diesel Series 53 engines:

The Detroit Diesel Series 53 engines are all two-stroke diesel engines. Two stroke engines work differently than four strokes, in that intake and exhaust happens on both the compression and power strokes. DDC created six different Series 53 variants, two; three; four; six; eight; and twelve cylinder versions. The blocks and heads were built of cast iron, making them incredibly heavy and prone to overheating. Some 6-53s got aluminum blocks.

The 53 Series gets its name from the displacement produced by each individual cylinder, 53 cid – which is true regardless of how many cylinders total were in the engine. DDC gave the two and twelve cylinder versions relatively limited production runs. The three, four, and six cylinder versions were much more common – especially the six-cylinder. GM primarily used the eight cylinder for marine applications.

There are both naturally aspirated and turbocharged versions, with the turbo versions making more power. DDC added the turbo versions starting in the mid-’70s, and nearly all engines were available in both versions. The turbo was originally a TE0675 turbo that produced different levels of boost per application, but was eventually changed to a TD05. All engines also had either two or four valve cylinder heads and had the same 3.875” x 4.5” bore and stroke. There were also inline and V configurations for the three, four, six, and eight cylinder Series 53s.

The inline and V versions used roughly the same parts but had different mounting for the turbocharged versions. They used the same sized blocks, except the length was different. Originally, naturally aspirated versions had different blocks, but in the 1980s DDC started using the turbo blocks exclusively. There were extensive differences internally between the naturally aspirated and turbocharged versions. The turbo versions were stronger and were designed for more efficiency with the turbos’ higher compression.

In 1984, DDC released an updated version of the Series 53 three, four, and six cylinder engines. These “Silver 53s” were created to be more fuel efficient, operate quieter, make more power, and last longer. The air induction system was reworked to reduce pumping losses from the roots blower and was given a more efficient turbo. DDC also modified the cylinder ports for better air swirl and air inlet timing and they improved the valve train.

Interestingly, all series 53 engines had a roots type blower on them – even the turbocharged ones. The roots blowers were not meant to provide boost, but rather aided cylinder scavenging by expelling exhaust gasses and replacing them with outside air. The cylinder walls contain a row of ports that are above the piston when it is at the bottom of its stroke. These ports admit the air from the roots blower into the cylinder as soon as the rim of the piston uncovers the ports, allowing for scavenging.

The non-turbocharged engines were still considered naturally aspirated, even with the roots blower.

The DDC Series 53 engines are known for being very reliable and sturdy. These engines will easily run for over 3,000 hours without issue if taken care of properly. The fact that they are so extensively used in so many different applications should be an indicator of its reliability. If you’re driving troops in and out of a war zone, you definitely want an engine that you can rely on!

The biggest problem with the 53 Series of engines are the injectors, which are prone to fouling, leaking, seizing, and sticking open. The original “s” series of injectors had lower pressure and were worse for cold stars. The upgraded “n” series was much better and rectified a lot of these issues. The injectors are especially sensitive to dirty fuel.

Some of the 8-53s used in marine applications were reported to have had broken cranks, but that was relatively isolated. For the most part, the Series 53s were not prone to issues and had great longevity. The fact that they are still built today for the US Army, over six decades after they were introduced, is a serious testament to their reliability.

Ultimately, the emissions inefficiency of the series 53s is what led to their production demise for emissions regulated vehicles. The two-stroke design was too hard to bring into emissions compliance, hence its use in non-regulated applications.

The Detroit Diesel series 53 is a very common engine for diesel swaps into older Chevys and for commercial truckers. The best way to up power on the engine is going to be to add a larger turbocharger and run more boost. The 3-53, 4-53, and 6-53s are probably the most common engines used in swaps today – both N/A and turbo. Industrial engines have variable speed governors which should be swapped for limiting speed ones.

The turbo versions are going to be the easiest to work with for modding. It has more durable and more efficient internals and is already set up for a turbo. Before adding a larger turbo, it’s important to upgrade the injectors to larger ones. A heavier duty fuel pump is also a good idea, as are a ported manifold and headers. A larger and more efficient intercooler will also help with charge temps when running more boost.

Overall, the Detroit Diesel Series 53 engines were some of the top engines DDC ever produced. They were used in countless vehicles, from marine, to commercial trucking, to various military applications. DDC series 53 powered engines have been around since the late 1950s, and they are still being built today.

Series 53s are very common for swaps into old Chevy trucks and for commercial truckers. Due to their reliability, it’s common to see people swapping series 53s that are decades old into their trucks. With some careful maintenance and a tune up, these engines will last for 1,000s of hours without issue.