The 6.2L Detroit Diesel debuted in 1982 as a collaboration between General Motors and Detroit Diesel. The engine was naturally aspirated and powered by diesel. It was available in every application of square bodies from 1982 to 1991. The engine had two versions — the C and J code.

The C code was a lighter-duty version mostly used on half-ton and three-quarter trucks. These versions were emission compliant with an Exhaust Gas Recirculation system. The J code was the heavy-duty version without emissions equipment and was used in one-ton and military trucks.

The engine specs varied depending on the code. However, the horsepower ranged from 130 to 160. The torque also ranged from 240 to 275 lb-ft of torque. The engine was designed for fuel economy and light tow duty. With a compression ratio of 21.5 to 1, the engine delivered great fuel economy. 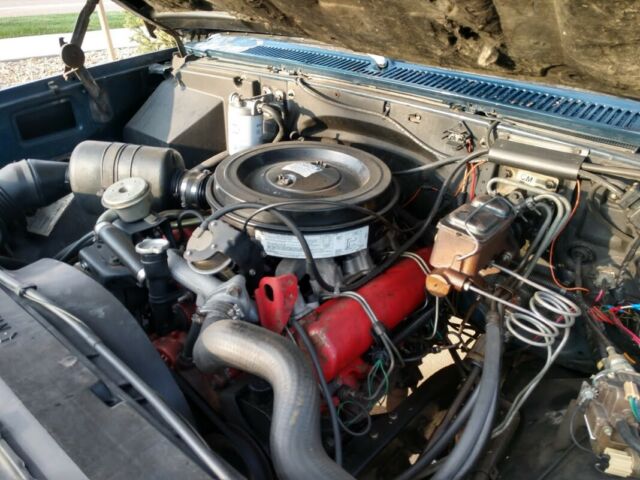 The 6.2L Detroit Diesel engine was used in several vehicles, including Blazers, Suburbans, Pickups, Chassis cabs, and full-sized vans. The engine was inside the following vehicles between 1982 and 1993:

The engine was released in 1982 and was available until 1994. During these periods, several versions of the engine were built. The engine can be classified into two categories: C and J code. While the C code was the lighter-duty variant with lighter-duty heads, the J code was the heavier duty.

The engine was designed for fuel economy and light duty tow. Comparing its performance with today’s standards, the 6.2L Detroit Diesel was powerless. With 130HP and 240lb-ft of torque, the engine couldn’t compete with the big-block powerhouses back then. Back in the day, drivers turned to the big-block engines for power and performance but looked towards the 6.2L Detroit Diesel for fuel-efficiency.

Considering that the last batch of the 6.2L Detroit Diesel engines left the manufacturing plant nearly three decades ago, one would be surprised that the engine is still being sought after by diesel enthusiasts today. The simplicity, low price point, availability, and tuning potential make this old engine appealing.

The engine is naturally aspirated, and adding a turbocharger is the most effective way of boosting its performance. Gale Banks started supplying factory turbochargers in 1989, which are still available to date. The engine performance can be further improved by tweaking the stock Stanadyne DB2 injection pump to increase fuel delivery and modifying the exhaust system.

You can also swap out the stock intake manifold for that of a 6.5L engine to further improve performance and acceleration. The stock intake manifold was restrictive and less responsive. Depending on how deep your pocket is, you can have up to 200 HP and 375 lb-ft of torque. Remember to keep boost within reasonable limits as the engine design is over twenty years old and not the strongest.

Common Issues in the 6.2 Detroit Diesel

The earliest release of the engine was plagued with reliability issues, making them encounter some catastrophic failures. Although the reliability issues were rectified in the subsequent release, discussed below are the likely problems you may encounter in the 6.2L Detroit Diesel engine:

A discussion about the common issues in the 6.2L Detroit Diesel without its failing crankshaft is incomplete. The 6.2L and 6.5L Detroit Diesel crankshaft weren’t the greatest — they were known to break. However, the chances and estimated mileage of the crankshaft’s failure are unknown. Some crankshaft broke after traveling thousands of miles, while others blew up at low mileage.

Although a defective harmonic balancer was identified as the cause of failing crankshafts, there have been instances where the balancers were fine, and the crankshaft still broke. The failures with perfectly functional harmonic balancers could be easily attributed to substandard crankshafts used in the initial release. However, these issues was addressed in subsequent engines.

Most of these failures with harmonic balancers that were in great shape occurred after tuning the engine, especially following turbocharger installation. Thus, installing a turbocharger on the 6.2L Detroit Diesel increases the chances of crankshaft failure. Nonetheless, replacing the harmonic balancer every 100,000 miles and keeping all tuning within engine capabilities will help limit the possibility of crankshaft failure.

A glow plug is an ignition control device designed for diesel engines and fitted to the cylinder head in an indirect injection engine with the tip projecting into the pre-combustion chamber. Unlike spark plugs that work non-stop while driving, the glow plug is only needed during ignition to pre-heat the intake air to a self-igniting temperature.

However, the glow plug in this engine often fails and can be a bit troublesome when they do — they usually swell up and may refuse to come off during replacement. Even worse, they could get busted in the engine cylinder, shattering into bits between the piston and valve.

Symptoms of a Failed Glow Plug

Upgrading to 60G glow plugs with a manual push-button activation increases the plug’s reliability. It is best to replace all glow plugs simultaneously whenever you have a bad one since the rest are likely not far from failing. Better yet, replace the plugs every 60,000 miles as part of preventive maintenance, even if they haven’t failed to prevent having to deal with swollen tips during replacement.

Besides overheating, the engine was famous for blown head gaskets, cracked the cylinder head, and engine blocks. Certainly, the cracking cylinder head and engine blocks are connected with the engine’s poor casting quality. However, the failure of the cooling system could also aggravate the occurrence of these catastrophic failures.

General Motor corrected the defective head gaskets and casting error in the subsequent release. Updating to an aluminum radiator and an electric fan should also help improve the cooling system’s efficiency. However, installing a turbocharger increases the chances of overheating and catastrophic failures.

Most of the problems that were said to have plagued these engines could all be managed or even eliminated. The swelling glow plugs could be rectified using a more reliable plug and installing manual push-button activation. The engine was built for fuel efficiency and not performance. Pushing it beyond its limit increases the chances of catastrophic failures.

The crankshafts weren’t the strongest because they were made from cast iron instead of forged steel, and the engine also didn’t have a turbocharger for a good reason. Installing one amplifies the chances of breaking the crankshaft, overheating the engine, blowing the head gasket, and cracking the cylinder block.

Despite all the dismissive opinions about the engine’s reliability, we believe the 6.2L Detroit Diesel engines have gained a bad reputation they do not deserve. While the earlier versions of the engine had reliability issues that were subsequently corrected, the 6.2L is a good and dependable engine provided it is used as intended.

The 6.2L Detroit Diesel was a light-duty engine designed for fuel efficiency and light tow duty. It was a collaboration between General Motors and Detroit Diesel but was replaced by the much more powerful 6.5L Detroit Diesel. Although the 6.2L engine was considered underpowered and may lose a race or pull in its stock form, it can be further tuned to improve its performance. Rebuilding or restoring an old 6.2L may require replacing some components, after which you can expect the engine to run for years.