The 6.6L Duramax LML hit the market in 2011 and stuck around through 2016 after which it was replaced by the L5P. The LML produced a solid 397hp and 765lb-ft. of torque. While the LML’s torque output fell slightly short of the 6.7 Powerstroke and 6.7 Cummins, the engine produced just about as much power as any average diesel driver would need.

Fortunately, for those searching for more power, 5 simple bolt-on mods can take the Duramax LML past 500whp and 1000wtq. However, the Duramax LML does have some weak points from a tuning perspective that must be addressed if you plan on adding more than just an intake and tune.

This guide will cover the 5 best Duramax LML mods as well as supporting mods required for various power levels. Our top 5 mods are going to be focused on power-adding upgrades. However, as we lay out below, there are various “supporting mods” that will need to be made along the way. Just keep in mind that if you add the 5 mods we mention below you will also need to add a handful of supporting mods to handle the power these 5 performance upgrades will provide. 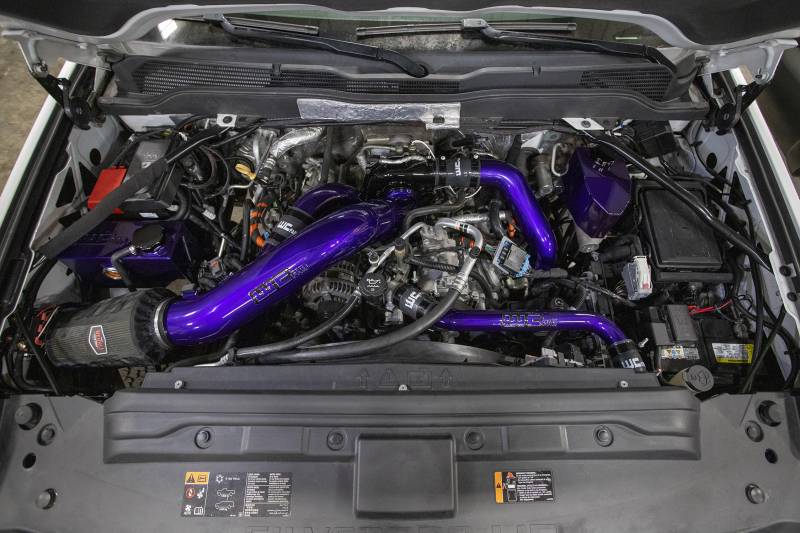 Modding the Duramax LML has a few hurdles or restrictions that are important to mention. Before I discuss some of the weak points, keep in mind these are hurdles all diesel engines face, not just the 6.6L Duramax or the LML. The LML remains just as mod-able as both the Powerstroke and Cummins. Here are our spark notes on the below items:

The biggest hurdle with the LML is the CP4.2 fuel pump. The CP4.2 flows about 20% less fuel than the predecessor CP3. The fuel pump will tap out around the 450whp mark. Additionally, it is already prone to premature failure, so adding a lift pump is an important first step. Over 600whp and you’ll want to consider swapping the CP4.2 with a CP3. If you can afford doing it sooner we absolutely recommend it as blowing a CP4.2 can run you $10k+ for repairs.

Add a lift pump before you implement any of the 5 mods mentioned below.

Once you reach the 500whp mark you run into the second hurdle: the Allison 1000 transmission. Transmission tuning will help prolong the life of the Duramax A1000 but it will not stay reliable for too long when consistently pushing 500whp+. The first step is upgrading the torque converter which will handle about 750whp before the Allison needs to be fully built.

While the block, rods, and pistons were strengthened over the LBZ and LMM engines, the LML isn’t bulletproof. It can handle about 100whp more than those engines, making it good for about 700whp. Above those power levels the bottom end of the block including the pistons need to be upgraded. However, the pistons can crack about the 600whp mark, although it is more commonly seen on cars pushing beyond 650whp.

The best bang-for-the-buck mod, and best mod in general, on our list is a tuner. However, we put a cold air intake first on our list because it’s highly complimentary with a tune. And adding an intake before the tune will amplify the power gains of both the tune and intake as well as reduce stress on the turbo and overall engine by allowing it to breathe more easily.

When a tune is added the increased boost levels will make the stock LML intake restrictive. Higher boost requires more airflow as compressed air takes up less “space”, requiring more air to be compressed by the turbo. Adding an intake on a stock engine will provide some decent power gains and MPG improvements. Adding an intake to a tuned LML can result in 20whp and 60wtq gains in the lower end of the power curve and ~10whp and ~20wtq peak power gains.

Check out our in-depth Duramax LML Intake Upgrade Guide for more details on open vs closed intake systems. Additionally, it includes a few of our favorite intake systems.

Out of all the Duramax LML performance mods a tuner is hands down the best. Tuners offer the biggest power gains and the lowest cost per hp. A tuner alone can add over 100whp and over 200wtq with simple off-the-shelf maps. While this is the best mod, we still always like combo’ing an intake with a tune to help the turbo and let the engine breathe better.

The two options for engine tuning are using a plug-and-play tuner such as SCT, Edge, Bully Dog, etc. or opting for custom tuning. OBDII tuners like the ones I just mentioned are generally the easiest and best option for anyone simply looking for a little extra power. These tuners come with pre-built maps built for performance, towing, fuel economy, and more. They are easy to use and offer the ability to change between maps easily depending on what you are using your Duramax for.

Custom tuning is best for people looking to maximize performance gains. Unless you are planning on going full bolt-on, upgrading your turbo, or aiming for aggressive power gains then you likely don’t need custom tuning. However, since custom tunes are built specific to your exact engine and mods they offer the best power gains and are usually the most reliable.

TCM tuning is transmission tuning. Since a tuner alone can push you into the 500whp mark we absolutely recommend TCM tuning anytime you add a tune to your LML. At 450whp the stock Allison 1000 is okay but if you are pushing 450whp all the time it will eventually wear down. At 500whp it will start slipping more frequent and reliability will decrease significantly. Adding a TCM tune will make the A1000 pretty reliable at 450whp and will help prolong the life of the transmission at 500whp.

For 99% of readers, adding an intake and tune is probably all you need. Both of these will take you to 500whp, albeit from a tune on the more aggressive side. However, getting past the 500whp mark is when modding the LML starts to get really expensive.

Now that we have an intake and tune, we are bringing significantly more air into the engine. To help with exhaust air flow we recommend upgrading to a 4″ or even 5″ exhaust system. An LML is an emissions-heavy diesel so the emissions equipment does create additional exhaust restriction. However, without getting into deleting these systems upgrading the exhaust system will provide the biggest benefit.

The stock exhaust system is smaller and doesn’t hold a ton of air capacity which creates backpressure. Backpressure in the exhaust system is especially bad for turbo-diesel engines. Increased backpressure puts extra force on the turbine wheel which affects its ability to spool. Reducing backpressure allows for better turbo spool, a more efficient turbo, and therefore more horsepower.

One additional benefit is lower exhaust gas temps, or EGTs. Lower EGTs improves the health and reliability of the engine and turbo. Running a stock exhaust with significant mods will result in very high EGTs which can destroy the turbo easily.

You can opt for budget exhaust systems made out of aluminum or go for stainless steel systems. Stainless steel will last more than a decade, even in rust prone areas, whereas the aluminum exhausts will only last 4-5 years, but are considerably cheaper.

Earlier model downpipes connect to the turbo with a v-band. 2015.5 and later models have a 3-bolt flange. This is purely important for fitment purposes. Both downpipes are equally as restrictive.

As mentioned with exhaust backpressure earlier, it increases stress on the turbo and leads to higher EGTs. Higher EGTs decrease turbo (and internal) reliability which is why upgrading the downpipe is crucial for tuned and modified LML’s. While it is a power-adding mod it is also a good reliability mod for anybody who wants to preserve their turbo.

A 3″ downpipe will increase exhaust flow by about 20%. From a power perspective, it will add about 20whp and 25wtq.

The Duramax LML intercooler is actually quite good. Upgrading to a larger intake won’t add a ton of horsepower but it will increase reliability and provide more consistent power. We love intercooler upgrades since they help reduce engine temps which is great for reliability. Unfortunately, they are the most expensive upgrade on the list. However, we strongly recommend considering one if you’ve implemented all of the above mods.

Air is passed from the intake to the turbo. The air gets heated up from the turbo and therefore is sent to the intercooler to be cooled before it enters the combustion chamber. Running higher boost and an intake results in greater volumes of air being sent into the engine. At high power levels, especially when doing multiple back-to-back pulls or driving aggressively, the stock intercooler can become overwhelmed and lose its ability to effectively cool the air before entering the engine. This leads to heat soak which reduces power and decreases engine reliability.

While power gains aren’t great for the price, the reliability factor is worth it in our mind. While it might not add a lot of power it does prevent the loss of a lot of power caused by heat soak. Lower EGTs, more reliability, consistent performance, and a cooler engine make it worth the cost. It’s also a great mod for anyone who tows heavy things frequently for long distances.

At 500whp do you need an intercooler? Probably not. But, it still doesn’t hurt.

With 765lb-ft. of torque, I’m not sure you really need much more power. However, if you do a simple cold air intake and tuner can give you a 500whp LML. The downside to the LML is that modifying it beyond 500whp gets very expensive and requires significantly more modifications.

Getting to 500whp with a tune and intake will require a decently aggressive tune. Therefore, our recommendation is to add an intake, downpipe, exhaust system, and intercooler and then run a more modest tune to help improve reliability. We didn’t cover lift pumps in depth, but the CP4.2 is a death machine so please either swap it for a CP3 or add a lift pump before you add a tune.

Above 500whp and you’ll need to start looking into turbo upgrades, built transmissions, fueling upgrades such as injectors and CP3 conversions, just to name a few. There are also some solid mods that we didn’t include here that are good in the early stages such as a y-bridge upgrade, high-flow up-pipes, and intercooler piping.

Overall, the LML gets a solid grade for tune-ability. Getting to 500whp is super easy and inexpensive but pushing past that is really only for the people dedicated to high horsepower builds.

Let us know your experience with modding the Duramax LML.