Released in 2001 the 8.1L Vortec was the biggest and last of the GM big-blocks to be produced. It replaced the 7.4 Vortec and was around until 2006 when it was phased out in favor of the smaller and more fuel efficient Vortec engines.

The Vortec 8100 was built off of the GM 454 engine platform, also known as the 7.4 Vortec. It was produced as a gas alternative to the new Duramax LB7 diesel, offering a high-torque gas engine capable of towing just about anything. The 8.1 Vortec was produced to compete with Dodge’s 8.1 Magnum V10, and Ford’s V10 Triton engines of the time.

The big 496 cubic inch 8.1L produced 340hp and 455lb-ft. of torque in truck applications but was capable of a lot more. While it was predominantly used in the 2500HD/3500HD trucks and suburbans it was also used in a number of commercial trucks, industrial vehicles, and RV’s. Additionally, Navistar built a marine version that produced 550hp and 690lb-ft. of torque.

The guide is going to cover all the basics on the Vortec 8100 including specs, common problems and reliability, best performance upgrades, fuel economy, towing capacity and a number of frequently asked questions. 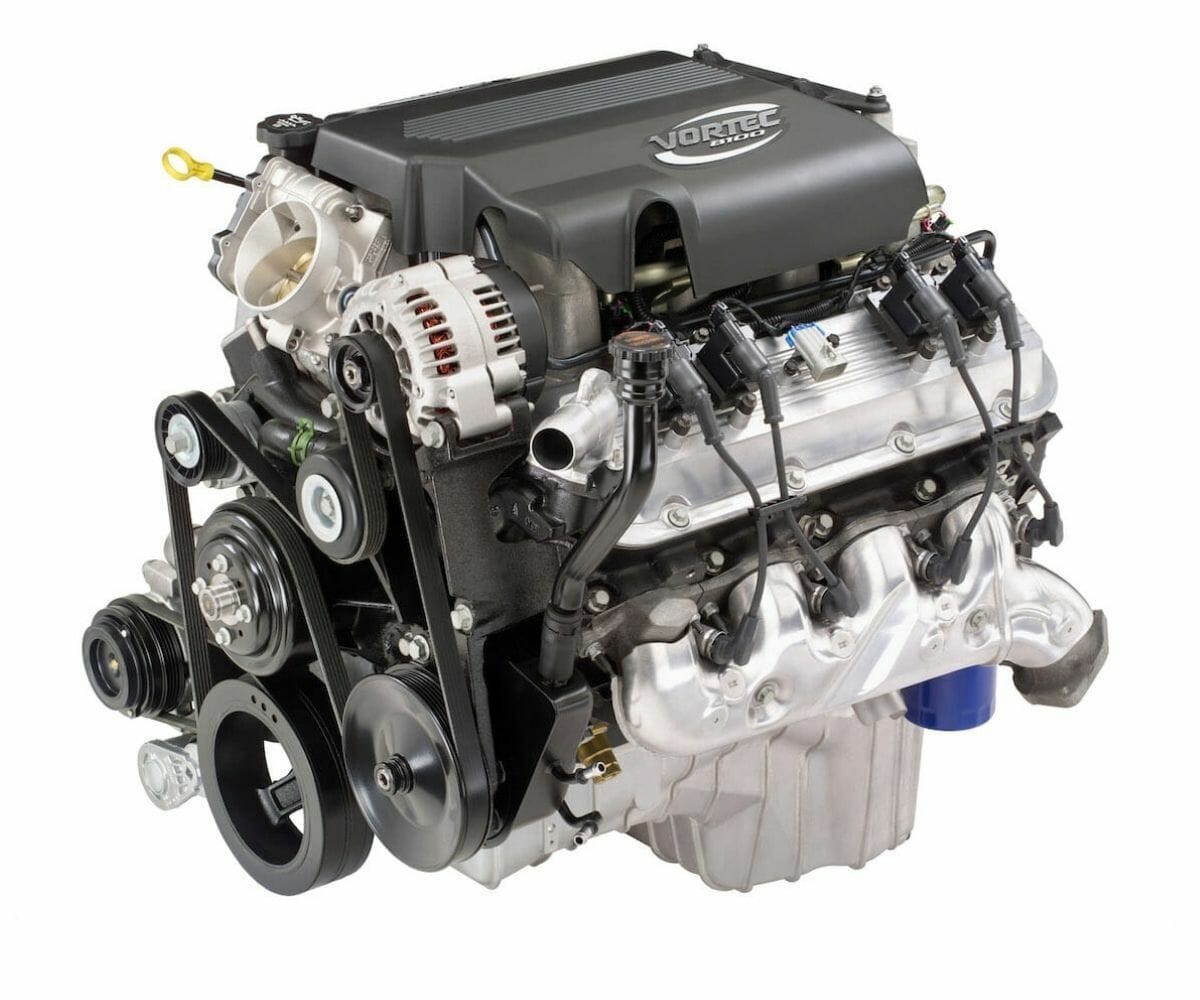 All vehicles using the 8.1L V8 used the L18 engine as no other variants were produced.

Built off of the Vortec 7400, the 8100 received a stroke increase which increased the displacement to 8.1L. Additionally, it received new intake ports and a new head design. Fueling is driven by sequential multi-port fuel injection. It is a 16-valve pushrod overhead valve configuration. Both the head and block are made of cast-iron. Power was put to the ground either with an Allison 1000 transmission or a ZF 6-speed. The Yukon and Suburban models were only available with an automatic 4-speed 4L85E transmission.

While the Vortec 8100 is a beast of an engine, it did have a number of common problems. The majority of these problems are small in nature and none are really very alarming or catastrophic. We have a complete guide on engine problems if you are looking for more detail than we provide here.

The most common issue on the 8.1L V8 Vortec is the crankshaft position sensor. This sensor measures the speed and rotation of the crankshaft which then controls engine timing. The sensor fails frequently which causes it to send bad readings to the ECU, which results in the timing being thrown out of whack.

The result of a bad CPS is very poor performance, rough idling and frequent engine stalls, and issues with no-starts. Basically, the engine runs really rough due to the timing misalignment. It will throw a check engine light that can help diagnose the issue. A bad CPS will make the vortec almost undrivable. Unfortunately replacing the sensor can be a big pain.

This problem is most common on 2001-2003 models as it was subsequently fixed by GM with a better sensor design.

Gaskets are wear and tear items and naturally fail over time. The intake manifold gasket on the 8.1 Vortec is the most common one to fail. When the gasket fails it creates an air leak, also known as a vacuum leak, which allows air to seep out of the intake tract before entering the cylinders. The result is the engine not getting enough air, throwing off air to fuel ratios.

This will cause the engine to run poorly, idle rough, and create a lack of acceleration and power. Also, you might notice a whistling noise from the engine. This will also throw check engine lights, usually with a P1174 or P1175 engine code, which are the codes for rich and lean AFRs.

Replacing the gasket isn’t too difficult and the gaskets are pretty cheap so this isn’t a major problem. Occasionally, the leak might be caused by the manifold itself. The manifold is made of plastic and therefore can crack and leak over time, usually from overheating. If the manifold is bad it is usually a bit more expensive to repair.

Lifters open and close the cylinders valves, and are located on the camshaft. Lifter can develop a ticking noise that is commonly called lifter tick. In some engines lifter tick is rather harmless and on others it can be a sign of a more serious problem such as bent pushrods or failed lifters. Fortunately, on the 8.1 Vortec lifter tick is most commonly caused by oil deposits. As we will discuss later in this section, this engine consumes a lot of oil. This can cause oil deposits to build up around the lifters, causing the tick.

While the noise might be annoying and not ideal, it usually isn’t harmful at all. You might be able to fix the issue by running a few cans of Seafoam or Marvel Mystery Oil through the gas tank.

Another aftermath of the excess oil consumption issues is failed spark plugs. These are generally a maintenance item anyways, but they need to be replaced a lot more frequently on the Chevy 8.1 compared to other engines.

Spark plugs usually need to be replaced every 25,000 miles on this engine. The oil consumption can foul the plugs as some excess oil typically contaminates the plugs. Some engines have more oil consumption than others which can cause the spark plugs to fail even more frequently.

The last “problem” with the GM 8.1 is oil consumption. These engines are known to consume about 1 quart of oil every 2,000 to 5,000 miles. There really isn’t a big issue with this, just make sure you always keep it topped up on oil and keep a quart or two in the truck in case you need to fill-up on the road. The only real problem this causes is spark plug failure and lifter tick which aren’t really major issues. Therefore, oil consumption isn’t something to worry about despite it being somewhat frustrating from time to time.

With the majority of the common problems on the Vortec 8100 being pretty small and simple fixes, the 8.1 is considered extremely reliable. It is almost bulletproof and usually doesn’t have any issues seeing upwards of 300,000 miles.

These engines are underpowered compared to how much horsepower they can handle, which is part of what adds to their longevity. The stock block, head, and all the internals are very strong and unlikely to have any major issues at stock power levels. With that being said, neglecting the engine by allowing it to overheat or starve of oil are the two things that will cause significant damage. Make sure the oil is always topped up and prevent any overheating and these engines will run reliably for a long time.

Adding power will of course have an impact on reliability, but considering the engine is underpowered from the factory, you can throw a good bit of power at it without any cause for concern.

The 8.1 Vortec averages about 12-14mpg on the highway and 7-9mpg in the city. Combined driving results in about 10mpg. While the 8.1 is a beast of an engine and extremely reliable, the fuel economy is one of its biggest downsides. This is also driving around dry, not towing anything. MPG when towing will be a lot worse, making this an expensive tow rig.

Comparably, the Duramax LB7 averages about 18mpg combined and the LLY gets about 20mpg combined. So the Vortec is a big downgrade over the Duramax when it comes to fuel economy. With that being said, the Duramax engine option was somewhere around an $8,000 upgrade, so this helps even it out to an extent.

Since the 8.1 is capable of handling a good bit more power than it came with from the factory, there is some decent potential with performance upgrades. A version of the 8.1 made 550hp and 690lb-ft. of torque on the same block, head, and internals as the truck/SUV engines.

If you have $10k+ to spend you can easily take the 8.1 into 1000whp+ territory. However, you will lose a lot of street-ability with a setup like this so this is most frequently reserved for those building drag cars. With that being said, some basic bolt-ons can add decent power. If you want to take the truck to the next level without fully sending it you can look into turbo and supercharger upgrades which can get you around 600whp and 700wtq without requiring a big investment.

The 8.1 Vortec is good for about 1000whp on the stock block, crank, and internals. So, these engines can really handle as much horsepower as you can afford to buy. With that being said, reaching the 1000whp+ level is going to cost a good bit and also take away its ability to be a daily driver. So we are going to focus on the more practical power mods for those just looking to get a bit extra out of their trucks.

For these folks, sticking to basic bolt ons like tuning, headers, exhaust, and intake should be good to get you around the 400whp mark. Companies like Raylar Engineering make various power packages for the 8.1 Vortec. Their Stage 1 kit includes high-flow heads and cams. This looks a little different that our mod list, but it also costs over $5k so we would stick to the more basic mods first.

While turbocharging is a bit more popular on the Chevy 8.1, there are a number of supercharger kits out there as well. Raylar offers a 2.9L twin-screw supercharger kit. The kit runs about $8k without tuning or fuel pump upgrades.

The supercharger kit will give you around 600whp and 700lb-ft. of torque. However, there are a number of additional upgrades available like stroker kits and high-flow heads that can boost these power levels even further.

Ultimately, supercharging is a great option to create a high-horsepower streetable 8.1 Vortec. Albeit, the entry cost is a bit steep for a 20-year old engine.

The more popular alternative to a supercharger kit is a turbocharger. Which is best for you really depends on your power goals and what you plan on using the truck for. But turbochargers can be a bit less expensive way to enter into high-horsepower levels.

Turbo kits usually run anywhere from $4k to $8k, depending on power levels and the setup. Turbo’ing the vortec is a popular route to go so there is a wealth of information on the forums and plenty of performance brands who support this platform, making this a good route for anyone looking for 600whp+.

The 496 Vortec was built to be a work truck engine with great reliability and towing capacity. It wasn’t necessarily designed to be a high-performance engine like the LS engines are, so the LS is a better option for performance applications. If you are looking for reliability and towing, then the 8.1 can be enticing, but it’s just too expensive and heavy to consider for performance swaps when the alternative is an LS.

Here are a few common questions with simple answers.

What is the 8.1L Vortec Firing Order?

What is the Vortec 8100 Oil Capacity?

The engine holds 6.5 quarts of oil. The owners manual calls for 5W30 or 10W30 engine oil. Running 5W40 is common and is said to help reduce oil consumption compared to running the thinner oils.

What is the best transmission?