With the same displacement but different fuel types, the 6.6L gas L8T and the 6.6L Duramax diesel L5P engines certainly make a name for themselves when it comes to pulling their weight (and then some). Choosing between them, however, can be a much harder task.

If you’re not sure which 6.6L V8 motor to choose for your work horse, you’ve come to the right place. In this article, we’ll introduce you to both engines in a bit more detail, discussing the various issues that each one typically encounters in its lifetime. We’ll also compare the two in terms of power, fuel efficiency, and tow ratings, to give you a better idea as to which engine suits you better.

Spoiler alert: the long story short is that, when installed in the front of the 2500 and 3500 series Chevrolet and GMC trucks, either one of these power plants will get you where you need to go. How long of a journey that is really depends on you. 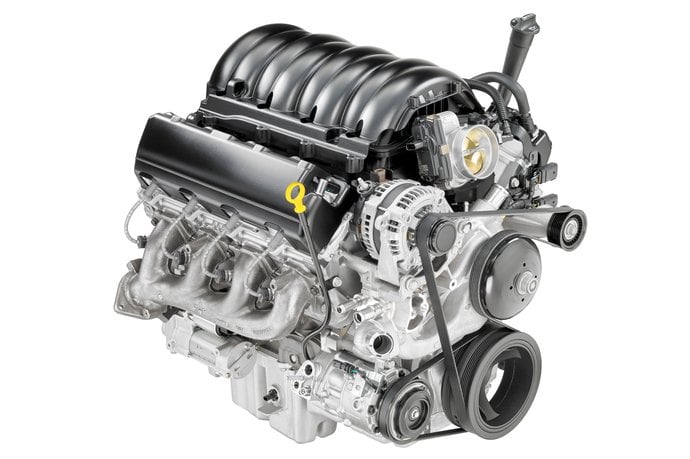 The fifth generation of the L8T engine debuted just a few years ago in the 2020 Chevy Silverado and 2020 GMC Sierra. This cast-iron power plant features aluminum heads and direct injection. It replaced the smaller 6.0L V8 L96/LC8 engine to put out more horsepower and torque for the long haul.

Improvements on the 6.6L L8T from the previous generation include a more precise fuel control and a higher compression ratio to get that extra bit of power. The torque band is broader as well, and begins at lower RPMs, so you’re able to get more out of it both hauling and passing.

The biggest improvement is that this 6.6L V8 does not use active or dynamic fuel management, or an auto start-stop ignition. For those of you who aren’t aware of the issues of active fuel management (AFM), check out our guide on deleting/disabling it. You’ll soon see why a non-AFM engine is a good thing, especially for these heavier-duty trucks.

The Duramax turbo diesel L5P engine is in its 20+ year of production after debuting in 2001. There are six variants of the power plant, of which the L5P is the latest model.

Here’s a short list of the previous motor variants that led to the L5P:

Produced from cast iron, the engine blocks on the L5P contain strong potential for tuning and performance. We’ll talk more about that in a minute, but first, let’s crunch the numbers on out-of-the-crate performance.

Higher torque is also a feature of the 6.6L Duramax diesel engine that the gas V8 just can’t match. With 910 lb-ft of torque, it’s nearly twice as much torque as the gas engine is capable of (464 lb-ft). Again, torque is made much lower in the RPM range with the diesel than the gas V8 motor.

There are also plenty of performance mods you can easily bolt-on to the L5P Duramax diesel to improve performance without going too crazy. At the same time, there are enthusiasts who have taken the L8T motor to the extreme, pulling 2,000 horsepower out of it in a built setup that pushes 32 pounds of boost through dual turbos.

Of course, these are not your everyday motors you’d use to haul trailers and cargo with, but it does show that the engines can be used for other applications as well.

No engine can be bullet-proof, at least in the sense that it never fails. Mechanical parts are subject to the same forces that wear us down, but in some cases, premature failure can hurt the reliability of an engine and take away from its strengths.

Here are some of the most common reliability issues both the L8T and the L5P suffer from.

When you compare the 6.6L gas L8T and the Duramax diesel L5P, there’s a lot more information out there about the Duramax. That’s not to say that the gas engine doesn’t have its faults, but they’re fewer and far between it seems, or at least not reported as much.

Another sore point for 6.6L L8T owners is the transmission. Many consider the 10-speed transmission to be a better choice for the large motor, especially since the 6-speed seems to lack the internals to put the performance potential of the engine to the ground. But that’s something that could be addressed in the next variation of the motor, perhaps for 2023 or 2024.

Here are some of the common issues found on the turbo diesel V8:

If the diesel particulate filter system is an issue you’re wanting to head off at the pass, we do have a guide for deleting the DPF system to increase performance and prevent costly maintenance issues.

Exact towing specifications will vary from model to model and even one trim level to the next, but both these power plants can tow quite a large load, from the payload to the trailer weight.

Gas 6.6L engines have a maximum payload of 7,442 pounds and a max tow rating of 17,200 pounds when properly equipped.

Compare that to the 6,523 pounds of payload the Duramax diesel is capable of, and you may find the gas engine wins out there. However, nothing compares to the 36,000 pounds capability that the 6.6L diesel can tow when properly equipped. The Duramax wins that contest all day long.

Because these engines are found on trucks in a class that isn’t rated by the EPA for fuel economy (even if they are still subject to emissions regulations), logic tells us that the diesel wins out.

This sentiment is echoed by Kelley Blue Book experts, who “can confidently say that the diesel is the more fuel-efficient choice.” A higher compression ratio means a more efficient burn.

At the same time, you might consider how you’ll be using your truck. Diesels are more fuel efficient at highway speeds, as are gas vehicles, but in town they suffer as much from idling and puttering around as gas engines do.

For many folks, the debate between the 6.6L L8T and the L5P comes down to a preference over gas vs. diesel. While the diesel is more fuel efficient and hauls a lot more with a lower RPM, broader torque band, the gas V8 is certainly more cost-effective in terms of maintenance.

The best way to differentiate between these two engines is to determine how you’ll use the truck you plan on purchasing. If you want to tow for the long haul, the Duramax turbo diesel should get you to 300,000+ miles no problem with proper maintenance. Jobs around town might be less impactful on your wallet if you’re behind the wheel of a gas V8 6.6L motor, however, though you will still have a respectable amount of torque to play with.