Throughout the production run, the 6.5L Detroit Diesel was used in several vehicles and had different variants, including L49, L56, L57, L65, LQM, and LQN. The L56 variant was turbocharged with an emission control system and was used in half-ton and lightweight three-quarter-ton trucks. Most one-ton and heavy-duty three-quarter-ton trucks used the turbocharged L65, which also had a soot trap to reduce exhaust emissions. Both L49 and L57 were naturally aspirated. 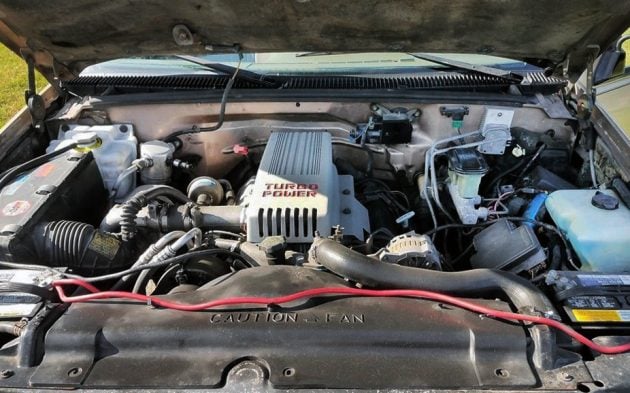 The engine application wasn’t limited to only pickup trucks but was extended to vans and SUVs. Between 1992 and 2002, the engine was used in several vehicles, including:

The 6.5L Detroit Diesel was released in 1992 as the advanced version of the 6.2L Detroit Diesel and as a means of meeting the stringent emission laws. During the engine production run, several versions of the engine were manufactured. Although most of these engines were turbocharged, naturally aspirated versions were used in some half-ton trucks. Some also had an emission control system, including an EGR system and a catalytic converter, while others only had a soot trap.

Considering that most of the 6.5L Detroit engines had a turbocharger and were marketed as the improved version of the 6.2L engine, one would expect it to compete with or outperform its peers. However, compared to Ford’s 7.3L or turbocharged 5.9L Dodge Cummins, the 6.5L Detroit Diesel’s performance could only be classified as satisfactory. The engine was a simple workhorse with decent power designed for excellent fuel mileage, which is why you don’t see a lot of drivers competing in the 6.5L Detroit Diesel.

Another option is to reflash or replace the Electronic Control Module. This undoubtedly increases the fuel flow and adds more power to your truck. However, before going this route, your engine needs to be in top-tier mechanical condition, and it doesn’t come cheap. You must swap out the stock exhaust system and also install a pyrometer gauge before reflashing the ECM to ensure your engine stays alive.

Increasing the engine boost is also an option if you intend to reflash the ECU. The engine maintains around 7 to 10 PSI boost levels in its stock form but has a maximum capacity of 15PSI. Since reflashing the ECU improves fuel flow, you should utilize the increased fuel supply by improving engine boost to magnify performance. However, pushing the boost levels beyond 15 PSI increases the chances of catastrophic failures.

You can also improve the engine’s reliability by upgrading the cooling system. Always remember that the 6.5L Detroit Diesel cannot match the Cummins or Duramax power, and keep all tunings within reasonable limits to avoid pushing it downhill.

The biggest complaint about the 6.5L Detroit Diesel was the injection pumps. Depending year of production, the pump used on this engine varied. Upon release, the engine featured Stanadyne’s mechanical DB2 pump, which was later swapped out in 1994 for a DS4 electronically-controlled injection pump. Unlike the fully mechanical pump, the DS4 pump was electronically controlled. Despite the variation in the operation of both pumps, they still performed the same function — pressurize and distribute fuel to the injectors.

However, the injection pumps used in these engines were known to fail. While the DB2 pump has been tested over the years and has proven reliable, the same could not be said about the brand new pump. The earliest DS4 pumps had some problems, which General Motors covered under an extended warranty which has since expired. During the production run, the company also strived to rectify the issues affecting the DS4 pump to improve its reliability. Still, the DS4 pumps became known to be unreliable.

Most times, the pump’s failure is caused by:

The newer DS4 injection pump used in the post-1994 6.5L diesel engines had a Pump Mounted Driver, otherwise known as Fuel Solenoid Driver (FSD) or injection pump control module. The unit is a small black box mounted at the front of the injection pump and was designed to inform the pump when to fire fuel into the cylinders.

The location of the PMD exposes it to extreme heat, resulting in the repeated failure of the unit. Without this unit, your injection pump will fail, affecting your engine’s capacity to run. The most practical solution is to relocate the PMD somewhere else other than its stock location. Usually, a ‘remote mount PMD kit’ is used to relocate the module out of the engine compartment.

The EPA further reduced the amount of sulfur in diesel fuel in 2006 by introducing ultra-low sulfur diesel (ULSD). However, the ultra-low sulfur diesel has a drawback on the injection pumps used in the 6.5L Detroit Diesel. These pumps were manufactured before the introduction of ULSD and were designed for much higher lubricity. Unfortunately, ULSD has much lower lubricity than what the 6.5L injection pumps were designed for.

The ULSD gradually causes premature wear of the injection pump and eventual failure of the pump. But this can be prevented by regularly using quality lubricity additives when refilling your tank.

Symptoms of a Defective Harmonic Balancer

Besides breaking crankshafts, the 6.5L Detroit Diesel was also prone to overheating. Ordinarily, the cooling system wouldn’t have an issue regulating the temperature under normal driving conditions. However, when you take things a step further by hauling or towing, the cooling system may become ineffective in dissipating the excess heat from the engine.

Before 1997, the engine’s cooling system used a low-flow water pump and a single thermostat. Clearly, it was poorly designed and incapable of removing the excess heat under extreme operating conditions. However, General Motors rectified the overheating issue by upgrading to a high-flow water pump and dual thermostats in 1997.

Hence, you should ensure that the cooling system is always in excellent condition to reduce the probability of overheating. Better yet, if you have a pre-1997 model and will be towing or hauling, it is best to upgrade the cooling system — the system’s thermostat, water pump, and fan assembly can be upgraded to a newer and more efficient one.

The 6.5L Detroit Diesel wasn’t the most reliable engine — they were known to experience injection pump failure, broken camshaft and overheat. Regardless of the known issues associated with these engines, the earlier 1992 and 93 model years were still the best in terms of performance and reliability. These pre-1994 engines had stronger blocks and mechanical injection pumps, which made the engine simple and dependable.

After 1993, the engines were shipped with a computer-controlled injection pump, whose Pump Mounted Driver and sensors repeatedly failed. The unreliable injection pump coupled with the ineffective cooling systems used in all pre-1997 model years and low-quality blocks used after 1993 were all factors that increased the chances of engine failure.

However, you can further improve your engine’s reliability with routine maintenance and some proactive measures, starting with

The engine was the improved workhorse that replaced the 6.2L Detroit Diesel. It was mostly sold with a turbocharger, but naturally aspirated versions were also available. Clearly, the engine performed better than the 6.2L, but it still didn’t have the strength to compete with Ford’s 7.3L or Dodge’s turbocharged 5.9L engine.

General Motors planned to meet tightening EPA emissions regulations and get a better share of the expanding pickup truck segment with the 6.5L Detroit Diesel. However, the company recognized that the 6.5L design architecture wasn’t sufficient to make it the best in performance among its peers. Subsequently, the engine was discontinued In 2002, but before then, AM General had purchased a manufacturing licence. General Motors went on to develop the Duramax while AM General continued manufacturing the 6.5L Diesel for the HMMWV.