Predecessor to the LML and successor to the LBZ, the LMM Duramax was launched mid-2007 and produced until 2010. One of the major changes to the new LMM was the DPF system which had a big impact on fuel economy. Despite the new restrictive exhaust equipment, power output was increased to 365hp and 660lb-ft. of torque.

While power levels for the LMM were good when it was produced back in the day, they pale in comparison to the new 1,000+lb-ft. torque diesels of today. Fortunately, some simple bolt-on modifications can easily add an extra 100+whp and a couple hundred extra foot pounds of torque.

This guide is going to cover the 5 best performance upgrades for the Duramax LMM. We’ll also cover the power limits of the LMM, performance restrictions, and supporting mods that are needed for various power levels. We are going to focus primarily on basic bolt-on upgrades. Getting the LMM to 600whp and past is really expensive ($15k+) so we’re guessing most folks are looking for the less expensive LMM mods. 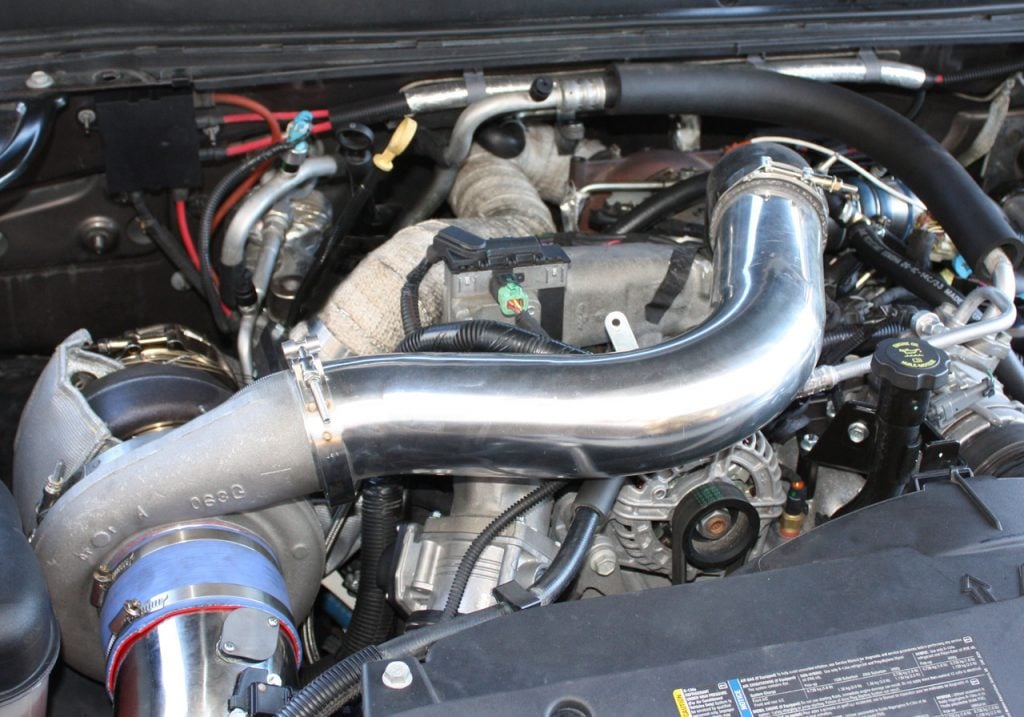 It’s pretty easy to achieve big power gains on the LMM, but there are a few hurdles to discuss. Piston and crankshaft failure are common LMM problems. While they aren’t necessarily weak, they are a performance restriction. The OEM piston and crank can handle about 600-650whp before they are likely to crack. Therefore, pushing past 600whp will require a built motor unless you want to risk blowing yours.

However, your Allison 1000 transmission will limit performance before the pistons do. The LMM Allison can handle about 450-500whp before it needs to be built. But, to run 450whp+ on it you will need a TCM tune to keep it reliable. Keep this in mind as the mods on this list will easily push you into 450whp territory.

The stock LMM turbo can handle around 550whp until it needs to be upgraded. A lift pump is recommended once you are around the 500whp mark. Fortunately, with a lift pump you won’t need injector upgrades until somewhere around the 600whp mark.

These 5 upgrades can easily add over 100whp. You’ll likely want to run a more modest tune unless you plan on building the Allison 1000, which will cost about $5k-$8k. At these power levels the LMM doesn’t really need any supporting mods, but adding a lift pump is never a bad idea once you are running a tune. We would recommend it if you can afford it, or if you plan on getting close to the 500whp mark.

The best bang-for-the-buck LMM mod is a tuner. A simple tuner can add up to 100whp for just a few hundred bucks. There are a few options for tuning the LMM. You can either buy a handheld flash tuner like an SCT or Edge device, or you can get custom tuning with something like EFI Live.

EFI Live is probably the most powerful tuning software for Duramax engines. You can also buy pre-built tuning packages for EFI Live so that it works more similarly to a handheld pre-loaded tuner. One of the best benefits of this software is that it also offers transmission tuning. As we mentioned previously, TCM tuning is highly recommended for 450whp+. Considering a tune can just about get you here alone, we absolutely recommend getting your transmission tuned too.

There are a lot of routes you can go here but there is no question tuning is the best mod for the LMM. If you just want some solid and easy power gains, you can stick to something like SCT, Edge, Bully Dog, etc. If you are looking for more robust tuning capabilities then we recommend EFI Live.

An upgraded intake is our second favorite mod since it is one of the best mods to combine with a tuner. Tuners primarily increase power by increasing the amount of boost the turbo is creating. This means the air coming through the intake is compressed even further before being sent into the combustion chamber. Because of this, it’s important to supply the turbo with more air since it needs to compress a greater volume of air.

We prefer open intakes to closed intakes. Ie. ones where the filter is exposed to the engine and not inside an enclosed box. Open intakes have bigger airflow increases over closed intakes. The extra flow will help provide bigger power gains, and reduce restriction on the turbo.

The power gains we quoted aren’t necessarily peak power gains, but rather max power gains throughout various parts of the power curve. Whether you are tuned or not an upgraded intake will really help the LMM breathe better which will result in a more efficient turbo and noticeable power gains and drivability improvements.

While we have an upgraded exhaust system on our list, a downpipe upgrade is actually our favorite exhaust mod. A downpipe will provide the best power gains and backpressure reduction since the downpipe bolts directly to the turbo.

The stock LMM downpipe is often called a “crushed” downpipe because it is really skinny. This makes it very restrictive to exhaust flow. Restricted exhaust flow causes backpressure, where pressure builds up in the downpipe because it can’t escape the exhaust quickly enough. Since it’s bolted to the downpipe this backpressure actually works against the turbo, making it harder for the turbo to spin its compressor wheel. This puts stress on the turbo, restricts performance, and also increases EGTs and engine temps.

Upgrading the LMM downpipe will improve the efficiency of the turbo, unlock solid power gains, and decrease engine temps and EGTs. Ultimately, it is one of the best reliability mods as heat is bad for diesel engines and it reduces stress on the turbo. Upgrading the downpipe is most beneficial when you are tuned.

The reason a full exhaust system is second on our list to the downpipe is because it sits after the DPF filter. After the downpipe, the DPF is the biggest restriction in the exhaust. Therefore, with the DPF still in place you won’t see as much improvement to exhaust flow with an exhaust system.

With that being said, deleting the DPF filter is probably one of the most popular LMM mods. We have a full LMM DPF delete guide if you want to dig in further. For this article I’ll just note that it is illegal to delete the DPF so we’ll instead look at DPF-back exhaust systems. You can however get a full exhaust system that also deletes the DPF if you’re okay with deleting the emissions equipment.

Anyways, a larger 4″ or 5″ exhaust system will still help reduce exhaust backpressure. Therefore, it will benefit the turbo and help reduce EGTs a bit more. The larger you go the more flow increase you will see and therefore the more benefit to power gains and EGTs.

You have a few options with exhaust systems. First is sizing, 4″ or 5″ systems are the most popular. You can also choose to get an exhaust with a muffler or go full straight-pipe. Material wise you can get an aluminum exhaust or stainless steel. Pricing on exhausts range from $400-$1,000 depending on the materials you want and sizing.

Intercoolers are probably the least popular mod on this list. Likely because they are rather expensive for the gains they provide. However, they are one of the best reliability upgrades for tuned and modified LMM’s. You won’t necessarily see a ton of power gains from an intercooler but you will see cooler engine temps and lower EGTs, especially if you tow frequently.

Intake air gets passed to the turbo where it is compressed. Turbo’s operate at extremely high temperatures which heats up the air as it compresses it. The air is therefore then sent into the intercooler to cool it down before it enters the combustion chamber. Increasing boost also increases the heat produced by the turbo. The stock intercooler can eventually become overwhelmed causing heat soak.

At 500whp, you probably don’t need an upgraded intercooler as the stock intercooler is pretty solid. However, it doesn’t hurt. It will still lower EGTs, improve reliability when tuned, and provide more consistent performance. It’s a great mod for anyone who pushes their LMM hard or tows a lot.

The LMM makes pretty good power from the factory with 365hp and 660lb-ft. of torque. However, for those who want more power 5 simple bolt-on mods can easily add over 100whp to the LMM for just a few thousand bucks. These simple mods should be able to get you to or past the 450whp mark which is where the LMM gets a bit more expensive to mod.

The Allison 1000 transmission needs to be tuned to hold 450-500whp consistently. Anything about 500whp and you’ll need a built transmission. The stock turbo is good for about 550whp until you’ll need to upgrade that. Fuel injectors are good until about 600whp, but a lift pump is recommended once you pass the 450whp mark or so. Lastly, the pistons and crank are good for about 650whp until they need to be upgraded.

Overall, getting to big power numbers can be quite expensive. However, adding an extra 100whp can be done pretty easily without sacrificing too much reliability. Our favorite bolt-on mods are a tuner, intake, downpipe, exhaust, and intercooler. A DPF delete is a great mod for the LMM if you are comfortable having a deleted truck.

What mods are you running or considering on your 2500 or 3500 Silverado or Sierra?