General Motors designed the 3.0L Duramax for use in their full-size half-ton trucks and SUVs. It was created as an alternative to the 6.6L Duramax which is far too big for the half-ton 1500 trucks. The engine was a collaboration between GM and Opel and was introduced as an option in the 2019 Chevrolet Silverado 1500 and GMC Sierra 1500. Although the engine is a clean-sheet design with advanced combustion and emissions technologies, it didn’t sacrifice power or efficiency. 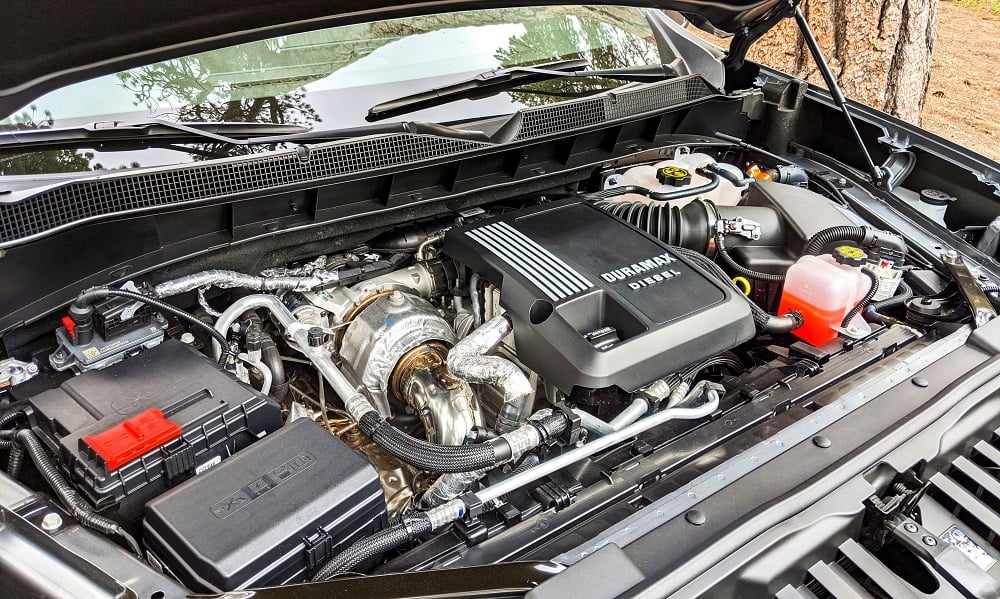 The 3.0L Duramax is an inline-six engine and has a much different configuration when compared to Ram’s 3.0L EcoDiesel or Ford’s 3.0L Powerstroke engine. It was made from cast aluminum to reduce its weight. The engine also has an Active Thermal Management system, which helps maintain optimal engine temperature for improved performance and emissions output. It is paired with a 10-speed automatic transmission making it exceptionally responsive and perfect for daily drivers.

It delivers 277 hp and 460 lb-ft of torque with a maximum towing capacity of 13,200 lbs in the 2022 GMC Sierra 1500, while the 2022 Silverado could tow up to 13,300 lbs. The increased towing capabilities of these trucks compared to the 9,000 lbs rating of earlier models were due to the chassis changes. With an EPA estimated 33 mpg on the highway for the 2WD and up to 30 mpg for the 4WD, the fuel economy is very impressive. The 3.0L Duramax I-6 LM2 Turbo Diesel engine is used in various vehicles, including the following.

Although the engine seems faultless upon release, the 3.0L Duramax has had its fair share of problems. However, it has remained dependable and one of GM’s most popular diesel engines. Below are some of the most common issues drivers have encountered with the 3.0L Duramax engines.

If you would rather consume this content via a video, check out our 3.0L Duramax Common Problems video below or on YouTube:

This is the most persistent issue that has plagued the 3.0L Duramax engine. The starter engages and cranks the engine for an extended period before starting or may fail to start. The problem has been reported in all the SUVs and trucks that GM fitted this engine, and the awful truth is that there is no specific mileage to watch out for the problem. While some drivers encountered the long crank after driving thousands of miles, some experienced it days after purchasing the truck.

It even gets worse as the actual cause of the problem is still unknown. There have been varying presumptions about the cause, and General Motors has released several TSBs. A damaged or warped camshaft position sensor wheel, faulty wiring harness, fuel pump, and actuators were all identified as the possible culprit.

In the PIP5806B TSB, the company explained that drivers might experience an intermittent extended crank or intermittent crank without starting if the trigger wheel is bent. The camshaft position sensor or trigger wheel is located close to the crankshaft and makes contact with the crankshaft during ignition to turn the engine over. Suppose the wheel is bent or damaged, it won’t make contact with the crankshaft and would need replacement. Depending on the level of damage, it could cause an extended crank or no start.

Replacing the trigger wheel is a strenuous and time-consuming task. It requires the total removal of the cab to access the wheel at the back of the engine, and there is still no guarantee that it would solve the problem. Some drivers have complained that the problem reoccurred or even persisted after replacing the wheel.

General Motor has also mentioned that a faulty wiring harness, actuators, or fuel pump could cause extended crank time. Recently, GM suggested that an update or software refresh of the engine’s ECU should help sort the issue, and there has been some positive feedback.

There is still no definite fix as the problem reoccurred or subsisted after several of these procedures. It is an intermittent issue that General Motors has had to deal with since the engine was released. Sometimes, they may have to attempt all the solutions highlighted above until they can identify the cause of the problem.

Although the oil pump belt replacement is part of routine maintenance required down the line, it made our list because it is a somewhat complex procedure. The engine’s oil pump is run by a wet belt always immersed in oil. The belt is driven off the crankshaft, and they are both located at the back of the engine. The engineers adopted this design primarily to make the engine compact and quiet operation. The major drawback encountered during the engine’s design was its length.

Using a chain requires a tensioner, making the engine longer than practicable. Also, the failure of a chain in that location would be catastrophic as it could shatter into the engine causing total failure. Hence, the only alternative was to use a belt, which in the worst cause its failure would only cause the engine to overheat. The company boasted that besides being sturdy, submerging the belt inside oil allows for constant lubrication, giving the belt a long lifespan.

Regardless of the belt’s lengthy life expectancy, it still requires replacement after 150,000 miles, making the engine’s design a drawback. The belt is at the back of the engine, and gaining access to it involves the removal of the transmission. Although swapping the belt once it becomes accessible is pretty straightforward, getting to it takes several hours.

Consequently, the direct exposure of the injectors to the combustion process causes carbon to accumulate on the injector nozzle, which affects its effectiveness. Although the injectors could last as long as your vehicle, you may want to consider replacing the injector if you notice the following symptoms:

Symptoms of a Failed Injector

The best way of ensuring your injector longevity is by using fuel additives. Fuel additives perform two main functions — they provide lubricity to protect the fuel injectors from wearing out and prevent deposit buildup on the nozzle by flushing the injectors to get rid of the deposit.

Although the EGR system uses a low-pressure EGR alongside a conventional high-pressure EGR system for overall engine efficiency, the system has been known to experience some issues down the line. Oftentimes, the EGR valve gets clogged up with carbon deposits, or the cooler may crack after repeated recycling of extreme temperatures. Consequently, these components would need repair or replacement.

While GM claims that the clean-sheet design makes the treatment of the engine exhaust gases more efficient and reliable than the traditional DPF and SCR system, the failure of the EGR is a problem that has plagued diesel engines.

However, the pump can only last so long — it has an estimated lifespan of 100,000 miles and depending on the driving habits, it could wear down earlier than expected. Unlike the oil pump belt service or trigger wheel replacement, the high-pressure pump replacement does not require dropping the transmission — it is easily accessible by removing the oil pan.

Symptoms of a Failed High-Pressure Pump

Replacing the high-pressure pump is inevitable. However, you can prolong the pump’s lifespan with good maintenance culture and avoid running on low fuel.

The crank no start issue is the major problem that has ravaged the 3.0L Duramax. Sometimes, the dealership may have to attempt several possible causes before detecting the problem, meaning your truck may stay longer at the dealership. Besides this issue, the other issues discussed, including oil pump belt replacement, high-pressure fuel pump failure, clogged injectors, and EGR failure, are all problems you will have to deal with as part of your maintenance service.

While the crank no start issue and the service requirement of the oil pump belt after 150,000 miles has brought the engine’s reliability into question, it has performed exceptionally since its release. It has proven itself to be a great workhorse, providing the daily drivers with an excellent alternative and just the right amount of power they need to get through their day-to-day activities.