The engine is a naturally-aspirated gasoline engine with advanced technologies, including active fuel management, variable valve timing, and direct fuel injection. It has 285 hp, 305 lb-ft of torque, and could tow up to 7,600 pounds, the highest for any base V6 in the truck segment.

Unlike the 4th gen Vortec engines, the EcoTec3 engines have an aluminum cylinder block. The engine has a decent fuel economy. The 2WD gets an EPA-estimated 16 city and 23 highway mpg, while the 4WD has an estimated rating of 16 city and 22 highway mpg. 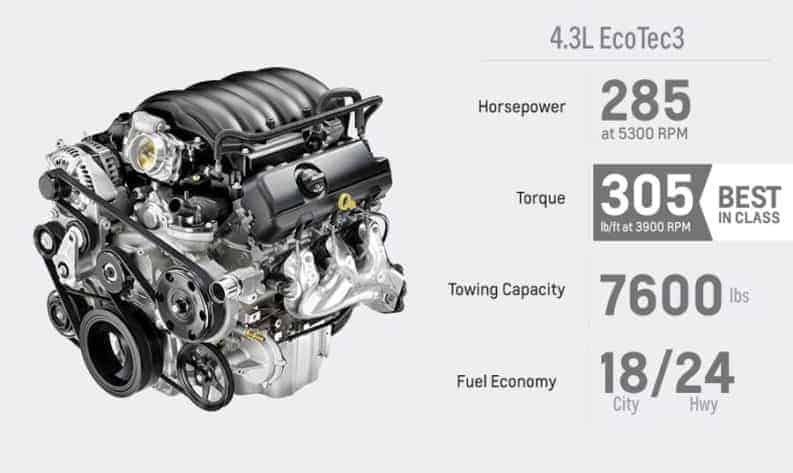 Despite the engine’s technological advancement, the engine still had some problems. The most significant problem was the failure of the active fuel management system. Other issues you would encounter with the engine include carbon buildup in the intake manifold, clogged injectors, high-pressure fuel pump failure, and PCV valve failure.

Port injected motors have the injectors spraying on the backside of the valves, which have a natural cleaning effect. On the contrary, direct injectors are isolated from the valves and inject fuel directly into the cylinder. Over time, the intake port and valve gather carbon deposits from the blowby gases redirected into the combustion chambers. The carbon deposit hinders airflow into the cylinder, causing reduced engine performance.

Symptoms of Carbon Buildup in the Intake Port and Valve

The engine usually shows symptoms of carbon deposit after traveling 80,000 to 100,000 miles. The symptoms include:

While fuel additives and regular oil change can help reduce carbon buildup, the most effective way of preventing carbon deposits in the intake manifold is by installing catch cans. Catch cans are aftermarket parts installed to help trap contaminants and oil returning from the PCV valve. It prevents these contaminants from making it into the intake manifold.

In the absence of a catch can, carbon deposits gather in the intake manifold over time. Without catch cans, the other way of getting rid of the carbon deposit is by mechanically cleaning the manifold port or walnut blasting.

The Active Fuel Management system isn’t a new concept in GM engines. It has been around since 2005. However, the system has had a history of failing and has been one of the prominent issues in GM engines. The early engines were notoriously known for their catastrophic failures. Although the system has been further improved and was re-introduced in the EcoTec3 engines, the system still fails. The design of the lifters makes them susceptible to failure, and you may notice some weird noise coming from the motor when it fails. In extreme cases, it can cause the total breakdown of your engine.

The only way to effectively deal with this issue is through Active Fuel Management (AFM) or Displacement on Demand (DOD) delete. There are a few options for disabling AFM. First, you can tune it out with the use of tuning software like HP Tuners.

The second option, and likely easiest and best option is to buy an AFM disabler. Disablers such as Range Technology’s AFM Disabler simply plug into the OBDII port to deactivate AFM/DOD. It does so without flashing the ECU like HP Tuners does, so it is undetectable by the dealer in case you have any warranty concerns. This is our recommended option for fixing the AFM issues.

The last option is to completely delete and remove the AFM system. Lifters can still fail even with AFM disabled so deleting the whole system is also a great choice. However, this option is a lot more complex and expensive. You can read more about it in our How to Delete AFM article.

Another drawback of a direct injection engine is the location of the injectors. The injector tip is located directly inside the combustion chambers, allowing for more precise fuel delivery at the later stage of the compression stroke. This helps the engine achieve a higher compression ratio resulting in improved torque, power, and fuel efficiency.

The downside is that they are exposed to extreme temperatures and intense carbon buildup. Over time, the carbon buildup gets into the injector nozzles, blocks them, and affects their performance. Usually, the injectors in the hottest location — the middle cylinders — tend to clog up faster than those at the end of the fuel rail.

You can protect the injectors by using fuel additives to keep them clean. The injectors are much more sensitive than port injectors, and when contaminants clog them, their performance is significantly impacted. Although the injectors are built to last your engine, they may begin to fail after exceeding 80,000 to 100,000 miles. You want to change all injectors to avoid future problems whenever you get a replacement.

All direct injection engines have two pumps — a low-pressure fuel pump inside the fuel tank and a high-pressure fuel pump located between the cylinder heads. Since the injectors are spraying directly into the cylinders, they need sufficient force to overcome the pressure generated by the engine’s compression. The pressure pump receives the fuel from the tank and pressurizes it from around 40 PSI to about 3,000 PSI before delivering it to the injectors.

While the pump is expected to last well over 100,000 miles, old age or poor maintenance could accelerate its wear, causing it to break down earlier than usual. The pump plays a crucial role in supplying the injectors with pressurized fuel, and its failure would impact their performance.

Clogged fuel injectors or carbon buildup can also cause some of the symptoms listed above. However, if you smell gasoline on your dipstick, it is a strong indicator of a malfunctioning high-pressure pump. When the pump fails, fuel gets blown past the pump seals into the crankcase, resulting in engine oil contamination. You may also get fault codes P0172 and P0175. Leaving the problem unaddressed can result in irreparable engine damage.

The PCV valve, also known as the positive crankcase ventilation valve, removes blowby gases from the engine’s crankcase. The valve redirects these gases into the combustion chambers through the intake manifold to further undergo combustion in another engine cycle for cleaner emissions.

The valve begins to wear down after an extended period of use and could get stuck in an open or closed position. Its failure can cause increased pressure, leading to seal failure. Overall, its failure takes impacts your engine performance and exhaust emissions.

The symptoms may vary depending on whether the valve is stuck in an open or closed position.

Most manufacturers recommend cleaning or replacing the valves after driving 20,000 to 50,000 miles. However, periodic inspection of the valves will help ensure that it runs smoothly.

Besides Active Fuel Management problems and carbon buildup, the 4.3L V6 EcoTec3 LV3 engine is very reliable. The AFM system failure is a major problem you would most definitely encounter, and has plagued most GM engines. The company is still yet to figure out the reason for its failure. Carbon buildup in the intake manifold, a common problem in all direct injection engines is another problem the engine would develop gradually.

The most practical solution is turning off the AFM system with an AFM Disabler. Alternatively, you can completely remove the AFM components. Of course, this procedure isn’t cheap, but it is the best way to prevent expensive repairs down the road. However, due to costs we usually recommend going the disabler route over a complete removal. Installing oil catch cans or walnut blasting after 30,000 miles should help tackle carbon build up in the intake manifold.

The engine performed flawlessly after an AFM delete and oil catch can installation. Most issues encountered later were primarily minor ones that developed with old age and increased mileage. The engine should run well over 200,000 miles with routine maintenance without needing any major repair.