GM replaced the Duramax LMM in 2011 with the LML in part due to emissions requirements. One of the new features of the LML was the addition of he SCR system in conjunction with DEF fluid, which GM claims reduced emissions levels by over 50 percent. However many early model LML’s experienced SCR and DEF problems, resulting in expensive repair bills.

While the Duramax emissions systems are good for what they are meant to do (reduce emissions), they do have some downsides. On the LML the SCR and DEF systems are prone to failure. Additionally, the DPF system can clog, and so on. Outside of expensive repairs these emissions systems also create a lot of backpressure in the exhaust system which is bad for the turbocharger.

For both preventative maintenance and performance reasons, deleting the Duramax LML DPF system is popular. This guide is going to discuss the various LML emissions systems, the pros and cons of deleting the DPF system, and what LML DPF delete kits you’ll need to get the job done. 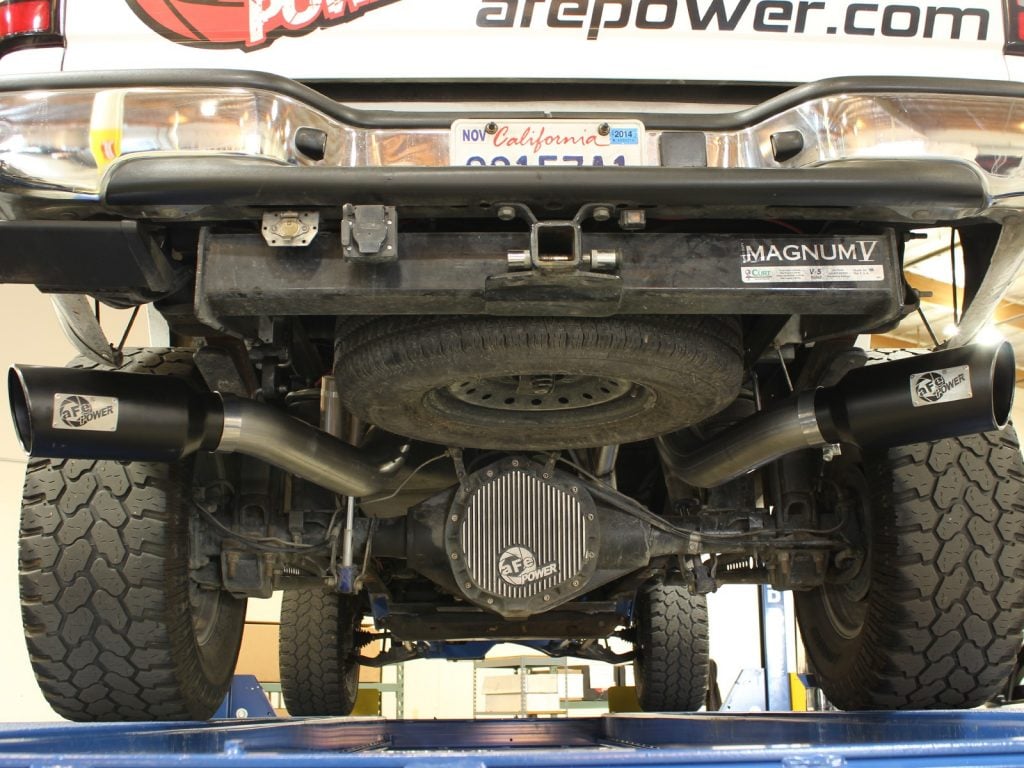 What is the Duramax LML DPF System?

We talked a lot about SCR and DEF in our intro paragraphs. So, what do those have to do with the DPF system? The DPF system is actually the last part of the Duramax emissions components in the exhaust. First is the diesel oxidation catalyst, or DOC, which is essentially a catalytic converter. The DOC usually sits right behind the downpipe. Next up is the SCR (selective cat reduction) system which uses DEF fluid to turn NOx into gas and water vapors. The DOC and SCR systems burn the exhaust gas down as much as possible before reaching the DPF.

On the Duramax LML the DPF filter is actually integrated into the same piping and housing as the SCR system. So the exhaust system goes downpipe > DOC > SCR > DPF > cat-back exhaust and muffler.

An additional emissions system not mentioned is the EGR, or exhaust gas recirculation, system. This occurs before the air enters the exhaust system. It takes exhaust gases after they leave the combustion chamber and recirculates it back into the intake system so it can be burned again during the combustion process, further reducing emissions.

What Does an LML Delete Kit Remove?

A DPF delete kit is a bit confusing because it actually deletes more than just the DPF. An LML DPF delete kit will remove the DOC, SCR, and DPF components. Since the DEF fluid is part of the SCR system it becomes irrelevant and is no longer needed.

Ultimately, it removes just about every emissions device except for the EGR system. Since the DEF fluid is no longer needed you can either just remove the tank completely or plug it and leave it.

A DPF delete kit is really just one piece of exhaust piping that bolts to the downpipe and the muffler. Therefore, it deletes all of the emissions system that sit within the exhaust.

Does an LML DPF Delete Remove the EGR?

An LML delete kit does not remove the EGR system. The EGR system needs to be deleted separately and is a bit more complex than the DPF delete.

A DPF delete is just an exhaust pipe. The EGR system sits before the exhaust and has a valve and piping that reroutes exhaust gases back into the intake tract. Deleting the EGR system requires plugging the EGR valve and replacing some hoses. There are also a number of other ancillary parts to this system such as an EGR cooler.

The two primary reasons to the delete the LML DPF are for performance gains and reliability. The DPF system is prone to clogging and the SCR has a lot of problems on the early LML’s. Not to mention when these parts break they can cost upwards of $5k to fix and replace. From a performance standpoint, these create a lot of exhaust backpressure which has a negative impact on the turbo and ultimately restricts engine performance.

A tune is required to delete the DPF system so the majority of the gains you see are going to be from the tune. On a stock LML, deleting the DPF won’t really do much outside of improve reliability and help the engine breathe better. The gains or benefits from a performance perspective come from a tune and from when you are trying to really push your LML with additional mods and upgrades.

The other benefits are predominantly reliability related. Less backpressure means lower EGTs which means a healthier engine and turbo. Not having these expensive emissions pieces reduces the potential for them to fail, leaving you with a $5k repair bill. Lastly, you’ll save some money at the pump by seeing better gas mileage and not needing DEF fluid anymore.

While the benefits seem great, there are some really good reasons to not delete the DPF system.

If you don’t care about the impact to the environment, the primary downside is the headache of dealing with having an illegal truck. With recent crackdowns, a lot of shops won’t touch deleted trucks and there certainly aren’t any that will install the deletes for you. You’ll lose any warranty which might not be an issue for the LML but you’ll also run into issues passing emissions testing which can be an issue.

The last point is that it is a bit more expensive than just buying an LML delete kit. You also need a delete-capable tuner which is going to run you another $500 or so.

Should You Delete the DPF System?

It makes a lot of sense for reliability, power potential, and saving some money on gas. However, the headache of dealing with a deleted truck can outweigh these benefits. Throwing a tune on your LML without deleting the DPF can create similar power gains. The emissions systems are only restrictive and need to be deleted when you’re upgrading the turbo and pushing big power levels.

Ultimately, we don’t recommend deleting emissions systems unless you are chasing crazy power levels, or your DPF/SCR has already failed. Deleting it after it has failed is no more challenging than deleting it before, so long as it doesn’t cause any additional engine problems.

If neither of those scenarios fit you then keeping the emissions systems on is the best bet. Repairs, maintenance, inspections, and so on become a lot more difficult and challenging and getting caught with a deleted LML can leave you with big fines or a crushed truck. Not to mention it will hurt resale value if you don’t reinstall the DPF before selling it.

How to Delete the Duramax LML DPF System

If deleting the DPF makes sense for you, or you don’t care and want to do it anyways, here’s how you do it. It requires two things:

First off, you’ll need the delete kit which is simply just a portion of the exhaust system. We’ll cover this below but you can either replace just the DPF section, or you can do a full turbo-back or downpipe-back exhaust. Secondly, you’ll need a tuner capable of handling the delete. Most name brand tuners are actually no longer capable, so we’ll provide a few recommendations below.

One side note before we get into this: 2015.5-2016 LML’s have different fitments than earlier models. 2011-2015 use a v-band flange whereas this was changed to a 3-bolt flange in mid-2015. Therefore fitment differs – just keep this in mind as you explore kits.

All of the emissions systems that get deleted sit in between the downpipe and the muffler. Using a simple delete kit will just replace the piping that has the DOC, DPF, and SCR. It should be a direct bolt on and not require any modification. It’s simply one pipe that replaces this whole section of the exhaust. These kits are usually about $300.

The second option is you can upgrade the full exhaust system from the downpipe and back. This will not only delete the DPF but will also allow you to upgrade the muffler and back (cat-back) portion of the exhaust. You can go a few routes here: either 4″ or 5″ exhaust piping. Additionally, you can choose straight pipe options for a louder exhaust note or get something with a muffler to keep it a bit more quiet. This can run from $500 up to $1,000 depending on what material you want and so on.

So the two options are: just replace the emissions piping, or replace the whole downpipe-back exhaust piping. Going with a full exhaust system is a bit more expensive and will make your truck a lot louder than just replacing the DPF piping.

Tuning is required when the DPF is deleted since there are a number of sensors and things like that attached to the system. Additionally, you’ll need to have the regeneration cycles tuned out. Without a tuner your LML will go into limp mode and be pretty much undriveable.

Not all tuners are capable of handling deleted LML’s. Unfortunately, the majority of the name brand tuners no longer support this. Two of the best tuners for deleted truck are the EZ Lynk and H&S Mini Maxx tuners. You can also custom tune it out with EFI Live or get custom tuning with either of the above tuners. The H&S tuner is a bit more affordable around $700 whereas the EZ Lynk runs about $1,500. The one downside to H&S is that it doesn’t work on 2015-2016 LML’s.

The Duramax LML has 4 main emissions systems: the EGR, DOC, SCR, and DPF. An LML “DPF delete” will remove the DPF, DOC, and SCR. Additionally, it will eliminate the need for DEF as well. The only remaining emissions system on your GM truck will be the EGR system.

DPF systems are prone to clogging, and the SCR/DEF is already a common failure item on the LML. Therefore, deleting these systems can lead to more reliability and a lower likelihood for expensive repair bills. Additionally, these systems cause a lot of backpressure in the exhaust which is bad for the turbo and causes higher EGTs.

Deleting the DPF system will result in a healthier and more reliable engine. Additionally, while it doesn’t necessarily create a ton of power on the LML it drastically increases its power potential. Unfortunately, deleting the DPF has a number of downsides and implications. It is technically illegal and will make repairs, inspections, resale, and so on more challenging.