Aside from the DPF filter and other exhaust-related emissions systems, the Duramax LML also has an EGR system. EGR stands for exhaust gas recirculation, which essentially routes exhaust gases back into the engine. EGR systems have a few components, most notably the EGR cooler, than are prone to failure. Additionally, it’s bad for engine longevity. Furthermore, it does restrict performance to a degree.

For both performance and reliability/longevity reasons, deleting the EGR system is a common LML mod. If you are deleting the EGR it probably makes sense to do a “full” delete and remove the DPF and other exhaust components too. You can check out our LML DPF delete guide for more information on removing DPF, DOC, SCR, and DEF.

This guide is going to cover what the LML EGR system is, the pro’s and con’s of deleting it, and how to delete it should you choose to do so. 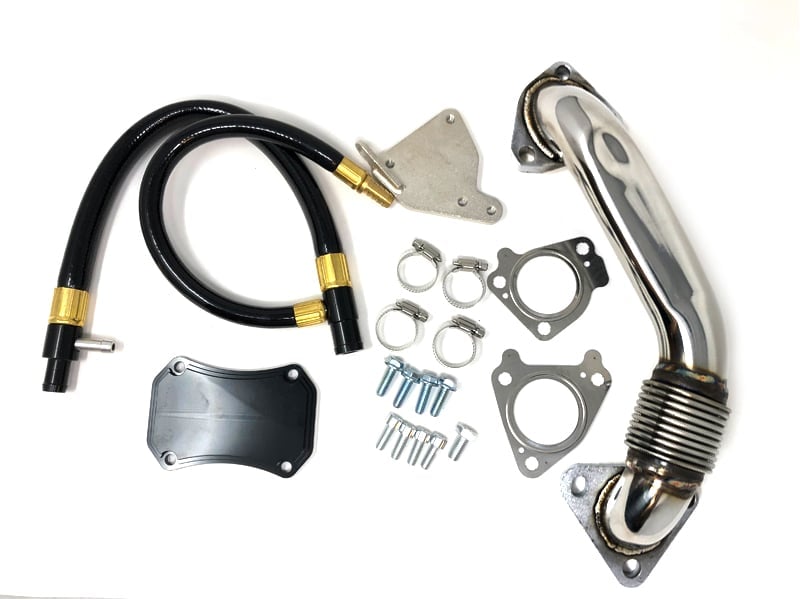 What is the LML EGR System?

Exhaust gases are very hot so for engine health and performance the gases first pass through an EGR cooler which cools the air down so that hot gas isn’t being pumped into the engine. An EGR cooler operates like an intercooler and uses engine coolant to cool the gases as they pass through. Unfortunately these coolers fail frequently on just about all diesel engines and are pretty expensive to replace.

Why is EGR Bad?

As we mentioned, diesel fuel produces a lot of diesel soot. This diesel soot is trapped by the DPF and further burned by the SCR/DEF system on the LML engine. However, this only happens once the exhaust gas reaches the exhaust system.

EGR re-routes exhaust gases before entering the exhaust system. Therefore, it ends up forcing dirty, diesel soot filled air back into the engine. This causes a lot of residual soot buildup in the engines and is ultimately one of the main reasons that today’s modern diesel engines aren’t as reliable and don’t last as long as the pre-emissions era engines.

The main reason for deleting the EGR is for reliability and longevity. While this prevents having to deal with a failed EGR cooler the benefit is more so in improved reliability via lower EGTs. Additionally, it prevents dirty soot from being pushed into the engine which results in increased reliability too. However, there is also a performance benefit. Clean air has more oxygen in it and therefore is more combustible. Recirculating the dirty air back into the engine reduces performance.

Solely deleting the EGR system will maybe add about 5hp by itself. However, when you combine the delete with a tuner and also delete the DPF system you can restore a lot power lost by these components and see power gains in excess of 100hp. While the gains mostly come from the tune, not having EGR will result in a healthier engine.

The biggest pro’s of an LML EGR delete are reliability and longevity. Engine temps and EGRs will be lower from not passing hot exhaust gases back into the engine. Additionally, it will prevent soot buildup within the combustion chamber. Overall, the engine will breathe cleaner and healthier and therefore improve reliability, especially when tuned.

One additional added benefit is improved fuel efficiency. You will likely see an increase in the 1-2mpg range but if you also delete the DPF and SCR system you can see gains up to about 4-5mpg which is pretty material on these gas guzzling trucks.

It almost sounds like a no-brainer, however, there are a number of reasons to not delete the EGR system (or any other emissions equipment):

While emissions equipment isn’t great for diesel engines and their reliability, they are great for the environment. And for that reason they are required by emissions laws in all 50 states. This makes deleting the EGR system illegal nationwide. You won’t pass inspections or emissions testing and can even get in legal trouble as many states are starting to target and crack down on deleted diesel trucks.

Additionally, it limits your resale value and maintenance options. Very few shops will mess with deletes anymore so you will likely need to DIY the install and could have a hard time finding shops willing to work on other maintenance.

Overall, there are a lot of headaches and obstacles to overcome when deleted.

Should You Delete the LML EGR?

Ultimately, this is a personal decision. It’s great for gas mileage and improving reliability of the LML. However, there are a lot of downsides and potential legal considerations that might outweigh the benefits, especially depending on what state you live in. If you do plan on deleting the EGR you might as well delete the DPF and other emissions equipment as well.

From a performance perspective there really isn’t much logic in deleting the EGR system unless you are chasing crazy power levels. Removing the EGR itself doesn’t unlock much in the way of power gains, so unless you are doing a 1000hp+ build you can get away with keeping it on.

How to Delete the Duramax LML EGR System

We aren’t going to provide a DIY on how to do it, but we will tell you what you need to get the job done. Deleting the EGR system is a bit more complicated than the DPF. The DPF is just exhaust piping, but the EGR has a number of valves and hoses associated that will need to be blocked off and re-routed. DIY’ing the install will probably take about 4-6 hours of labor and is probably an intermediate-level DIY.

The two things you need are:

If you just want to delete the EGR, you can buy a separate EGR delete kit. However, if you are planning on deleting the DPF too you can buy a bundle and save a some money by buying it all together. The best place to get these kits is from Diesel Dudes. They are one of the few places left selling delete kits and we highly recommend them.

Since we are deleting a bunch of major components that also has sensors and such in it, without a tuner your LML will throw a bunch of engine codes and go into limp mode. Essentially, without a tuner that can delete out these components your truck will be undriveable. However, you can’t just go buying any tuner out there. The tuner manufacturers removed all the delete tunes from their tuners for legal reasons, so you will need to purchase one from a 3rd party or get a custom tune. Since most tuners won’t do custom deletes anymore either your best bet is buying a tuner that already has plug-and-play delete tunes installed on it.

Again, Diesel Dudes is the best bet here too. They offer the H&S Mini Maxx or EFI Live tuners for the LML. They have delete tunes pre-installed in them so you don’t have to worry about custom tunes. Additionally, if you already have EFI Live, or EZ Lynk you can buy their tune one-off and install it into your existing device. If not, you can buy them here:

Again, you can buy the tuners with the EGR kit and a DPF delete kit if you buy their complete kit, and save some money.

EGR systems are good for reducing emissions and therefore good for the environment. However, they aren’t great for diesel engine reliability or longevity. Exhaust gas recirculation causes exhaust gases to be recirculated back into the engine prior to be cleaned by the exhaust emissions equipment, like the DPF. This results in the engine putting dirty, soot filled gas back into the combustion chamber which is bad for reliability, longevity, and gas mileage. Additionally, it can restrict and limit horsepower and torque.

Furthermore, EGR coolers are prone to failure and are decently expensive to replace. For all these reasons, deleting the EGR system on the LML is a common procedure, alongside deleting the DPF, for reliability, performance, and fuel economy reasons. However, the downside is that it is illegal.

Deleting the EGR essentially removes the EGR cooler and blocks off the valves so that exhaust gases go straight to the exhaust instead of back to the engine. You also need to reroute the coolant that the EGR cooler uses. A delete kit is about $300 and can be DIY’d in 3-6 hours depending on skill. You will also need a tuner to delete out all the check engine lights you’ll get without a functioning EGR system. A tuner with delete tunes will run you close to $1,000 so the cost of deleting the whole system is about $1,200. You can bundle and get a DPF delete alongside it and save a few bucks since you might as well delete both if you are deleting one.